Both of these formulas will produce the same result when the numbers are positive.  The one you use is just a matter of personal preference.

The goal of the percentage change formula is to allow us to make comparisons on performance between two or more items.  This could be time periods, entities, categories, businesses, etc.  This formula can also be used to calculate discount percentages.

What if the numbers are Negative?

After a bit of research, I have not found a good way to calculate the percentage change when either the old number or the new number are negative.  There are definitely formulas you can use, but they seem to produce incorrect or misleading results.

The Wall Street Journal has an old guide to earnings reports that says this:

This article might be outdated, as I have found that recent WSJ financial pages are using the ABS method (more on that below) to calculate percentage change, but the point is that percentage change on negative numbers can produce misleading results.

What about the ABS (Absolute) Method?

One common way to calculate percentage change with negative numbers it to make the denominator in the formula positive.  The ABS function is used in Excel to change the sign of the number to positive, or its absolute value.

Here is the formula that is commonly used:

Technically this formula works to produce a percentage change number with the correct sign (positive/negative).  However, I believe it produces misleading results.

The image below contains an example of this.  The Old value is negative and the New value is positive.

Although the calculation is technically correct because we changed the denominator (old value) to a positive number, the results don't really make sense to me.

If you were just looking at the percentage change numbers, you would think that Coffee did better than Cakes.  When in reality Cakes made a huge gain in profit over the prior period, much larger than Coffee.

The same issue happens when the numerator (new value) is negative.  Here is another example that produces misleading results. 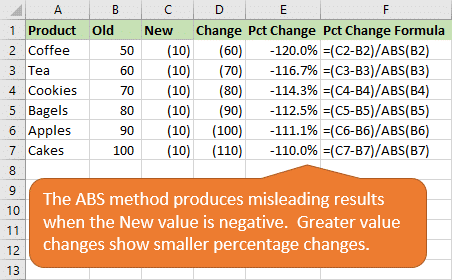 In this example Cakes had a larger negative value change, but smaller percentage change than Coffee.

I know, me too.  I've seen this method used throughout my career, and it looks like the Wall Street Journal is even using it.  I spotted it in some of their growth metrics on this page of Bank of America financials.

It's hard to say that it's completely wrong to use the ABS formula.  But, it's good to know that the results might be misleading.  So use it with caution! 😉

Here are a few ways to test for the presence of a negative number, and provide an alternate result.

Method #1: No Result for Negatives

The first thing we can do is check if either number is negative, and then display some text to tell the reader a percentage change calculation could not be made.

The following formula does this with an IF function and MIN function.

Here's how the formula works:

This formula also handles the divide by zero (#DIV/0!), so we don't have to wrap it in the IFERROR function.

The Wall Street Journal guide says that its earning reports display a “P” or “L” if there is a negative number and the company posted a profit or loss.

We could use this same methodology to tell our readers if the change was positive (P) or negative (N) when either value is negative.

The following formula tests for this with an additional IF function.

Here's how the formula works:

Other Methods for Percentage Change with Negatives?

Calculating the percentage change when negative numbers are involved is not easy.  The ABS method is probably the most commonly used, but it can produce misleading results.

The ultimate goal should be to keep things positive, so we don't have to worry about the negative… 😉

Do you have any other methods for this calculation?  Can we further simplify either of the methods above?  I'm interested to hear your thoughts.  Please leave a comment below with questions or suggestions.  Thanks!

How to Use XLOOKUP for Reverse Order Search

How to Use Index Match Instead of Vlookup