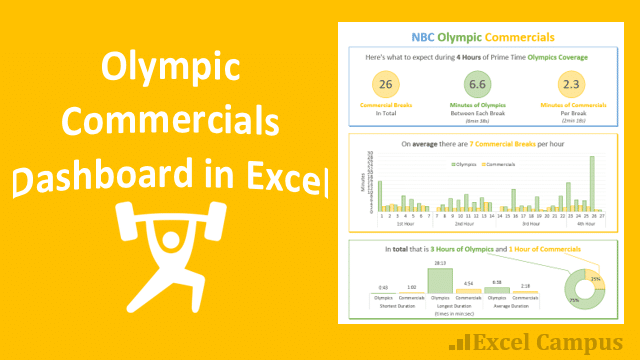 I love watching the Olympics.  It's cool to see the best athletes in the world compete in fun, weird, and exciting sports.  And I'm always amazed at how close their results are.  Gold medals are often decided by a hundredth of a second.

As my wife and I started watching the Olympics on TV last week, we quickly noticed that there were a lot of commercial breaks during NBC's nightly prime time coverage (NBC is the TV network that broadcasts the Olympics in the U.S.).  It seemed like there was a commercial break every 5 minutes.  We started wondering how many commercials we were watching.

So the Excel geek in me had to investigate…

I analyzed a recording of NBC's prime time coverage on Thursday August 11th 2016 from 8pm to 12am.  That's a 4 hour TV program of the most popular events that happened that day in Rio.

I created a simple data set that listed the start time of each change between Olympic coverage and commercial breaks.  I then used formulas to determine the end time and duration of each segment (Olympics & commercials).

The following dashboard highlights some of the metrics I found interesting.

I created a simple pivot table and added a few calculations for sum, percentage of column total, count, and average.

Checkout my 3 part video series on pivot tables and dashboards that has step-by-step instructions on how to create pivot tables with these metrics.

During 4 hours of TV coverage there were 26 commercial breaks.  That's an average of about 7 breaks per hour.  The longest segments of Olympics coverage came at the beginning and end of the program.

The shortest segment of coverage was 43 seconds and the longest commercial break was 4 minutes and 54 seconds.

I won't be able to explain every chart and calculation in this one article.  However, you can download the file to learn more about how it all works.

Most of the metrics in this data set and dashboard are about time.  In my article and video on the date system in Excel, I explain that each day on the calendar is represented by one whole number.

This means that times in Excel are a fraction of a day, or a fraction of 1.  So an hour is represented by the fraction 1/24, since there are 24 hours in a day.

A minute is represented by the fraction 1/24/60, since there are 60 minutes in an hour.

We can then use formatting to display these decimal numbers as hours, minutes, and seconds. The basic number format for time is h:mm:ss. This format can be found in the Custom category on Number Format menu in Excel.

My article on how to group times in Excel explains 3 ways to summarize times for reporting with pivot tables and formulas.

What Do You Think About the Commercials?

I hope you've seen how we can create a dashboard from just about any data set in Excel.  This entire dashboard was created from one list of time values.

When I first started watching the Olympic coverage, I was honestly surprised at how many commercials breaks there were.  My wife and I cut the cord on cable over 3 years ago, and we haven't watched many commercials since.  So this probably contributed to our shock.

However, I've come to realize that producing a program like this is a massive undertaking.  In my opinion, NBC's coverage of the Olympics is absolutely fantastic.  If you think about all the cameras, crew, and commentators they have, and the way they bring this all together, you realize that it must cost A LOT to produce this event.  All-in-all we have been thoroughly entertained with the coverage.

Plus, we have really enjoyed some of the commercials.  The series by AT&T with the family that loses their internet connection is great.  Funny and true!

What this all means is that NBC is keeping us active as we watch our favorite athletes shed their blood, sweat, and tears at a chance for gold.  Whether that's pressing the fast forward button on your DVR remote, or getting up off the couch for a stretch, you're going to stay busy while watching the Olympics.  And now you have the data to back it up. 🙂

Actual vs Targets Chart in Excel

When to Use Pie Charts – Best Practices