The For Next and For Each Loops Explained for VBA & Excel

Bottom line: The For Next Loops are some of the most powerful VBA macro coding techniques for automating common tasks in Excel.  This article explains how the loop works to repeat actions on a collection of items, which saves us a ton of time with our jobs.

The Power of VBA Loops

Can you think of a few tasks where you had to repeat the same process over and over again?

These tasks can be extremely time consuming and BORING!

Fortunately, there is a way out.  We can use loops in our VBA macros to repeat actions very quickly.  Tasks that can take hours to do manually can be completed in a matter of seconds with a loop.

The For Next Loop is the most common type of loop that helps us with these repetitive jobs.  In this article we will look at the two types of For Next Loops.

Download the free Excel file that contains examples of macros with the For Next Loop.

Download a PDF version of the article for printing.

The For Next And For Each Loops Explained For VBA Excel - Excel Campus.pdf (490.5 KB)

How Does the For Next Loop Work?

Examples of collections of objects include:

The job of the For Next Loop is to perform the same actions (lines of code) on each item in the collection.

Of course we can use logical statements like If statements to test properties and conditions before performing the actions.  The following macro only unhides sheets that have the phrase “ABC Global Co.” in cell A1 of each sheet, and hides all other sheets.

The Two Types of For Next Loops

There are really two types of For Next Loops.

Let's take a look at how each works.

The For Each Next Loop: Loops Through a Collection of Items

As we saw above, the The For Each Next Loop allows us to loop through a collection of items or objects.  This is probably the most common loop we use in Excel because we are working with collections of objects.  Again, these collections are the cells in a range, worksheets in a workbook, pivot tables in a worksheet, etc.

We will use the example of writing a For Each Next Loop to loop through all the worksheets in a workbook. 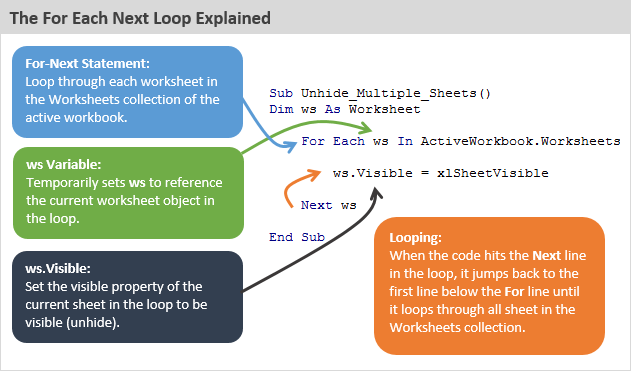 There are 4 basic steps to writing a For Each Next Loop in VBA:

Let's take a look at each of these steps in detail.

Step 1 – Declare a Variable for an Object

We first need to declare a variable that will temporarily store a reference to the object.

The Dim line at the top of the macro declares a variable as an object.  In this case the object is a worksheet.  We can create any variable name we want as long as it is not the same as another reference in VBA.  “ws” is the most common variable name for a worksheet object, but you can change this.

Next we will write the For Each statement.  This is the first line of code in the loop.

If you want to loop through worksheets of a specific workbook, then you can use the Workbooks property to reference that workbook by name.

Just remember that the workbook you reference has to be open before the For Next line of code runs.  Of course, we can use the Workbooks.Open method to open the workbook as well.

Step 3 – Add Code to Repeat for Each Iteration

After the For Each line, we add the line(s) of code that will be performed on each sheet.  In this example we just have one line of code that unhides the sheet.

This would be the same as if we were to set the ws variable to a specific sheet using the following line of code.

However, we do NOT need this line with the For Each Next Loop.  The loop takes care of setting the variable for us for each iteration in the loop.

Step 4 – The Next Line Loops Back

The final line of code in the loop is the Next line.

When the macro hits this line of code it does two things:

When the last item in the collection (worksheet in the workbook) is reached, the looping stops, and the macro continues on to the next line of code below the Next line.

What Order Does the For Each Loop Run In?

Items/Objects Are NOT Selected in the Loop

It's important to note that when we loop through a collection of objects, each object is NOT selected in Excel.

The loop creates a reference to the item/object with the variable.  The variable is temporarily set to a reference of the object.  The object is NOT selected and does NOT necessarily become the active object.  To select the object we can use the Select or Activate methods.  You would also have to make sure the objects parent object(s) are selected first.  Checkout my article on the Excel Object Model and Object Hierarchy in VBA for more on this.

The Next Loop: Loops Through a Set of Numbers

The basic operation of the For Next Loop is the same as the For Each Loop.  The difference is the format of the For line.

Step 1 – Declare a Variable for a Number

To loop through a set of numbers we first need to declare a variable to a whole number data type.  We can use Integer or Long integer.

The variable is referred to as the Counter because it increments or counts up/down for each iteration in the loop.

A side note on Long: The Long (integer) data type holds a bigger number than Integer.  It takes up more memory, but today's computer have so much memory that it's no longer a problem.  We can use Long variables all the time.  The letter L looks like the number 1 in VBA, so I'm now using i as the variable name even though I use Long as the data type.  This is all a matter of personal preference and you can name the variable whatever you want.

Step 2 – Write the For Statement

Next we write the For statement.  The basic construct is the keyword For, followed by the variable name (counter), then equals sign, start value To end value.

The start and end values can be referenced as numbers, or we can use integer/long variables in their place.

We can also use properties of objects that return a number.

That line of code would return the number of sheets in the active workbook.  However, it is NOT looping through each worksheet.  The loop is just looping through a set of numbers.  We have to create a reference to a worksheet with the counter variable (i) as the index number of the Worksheets property.  Step 3 shows this reference.

Step 3 – Add Code that Repeats for Each Iteration

The rest of the loop functions the same as the For Each loop.  We can add lines between the For and Next lines that will run for each iteration of the loop.  The counter variable can be used multiple times in these lines of code.

Step 4 – The Next Line Increments the Number & Loops Back

Finally, we add the Next line at the bottom.

If you wanted to shade every other row in a sheet, you might use a loop like this.

We can also use the Step Value to loop backwards by specifying a negative number.

Notice that the Start Value is now the larger number and the End Value is the smaller number.  The loops starts at 100 (Start Value) and subtracts 1 from the counter variable (Step -1) for each iteration in the loop until it gets to 1 (End Value).

The Step keyword is optional.  If you do not specify it then VBA assumes a Step value of 1.

Looping backwards is great if you are deleting items.  I will write a separate post on this, but the general idea is that when we are looping through a collection and deleting items, the size of the collection gets smaller as items are deleted.  The loop will typically hit an error once it gets to the 10th item, when there are now only 9 items in the collection.  Looping backwards prevents this potential error.

Typically the loop will iterate through all items in the collection, then continue on to the next line of code below the Next line.  However, we can stop the loop early with an Exit For statement.

The following macro uses the Exit For statement to exit the loop after the first sheet that starts with the word “Report” is found an unhidden.

The ws variable retains the reference to the worksheet after the loop is exited early, and can be used again in the code below the loop.

Variable Not Required After Next Keyword

You might have noticed that I added the variable after the Next keyword at the bottom of the loop in the examples above.

This is NOT required, and you might not see it in other examples you find on the web. However, I like to include the variable after Next for two reasons.

Therefore, I recommend adding the variable after the Next keyword as a best practice.  A little extra work up front will save time & headache in the future.  Trust me! 😉

Here are additional articles with macros that use at least one For Next Loop.

How to Make Your Excel Dashboards Resize for Different Screen Sizes

How to Repeat Tasks with VBA Code – Looping – Great article with lots of examples from my friend Chris Newman at The Spreadsheet Guru.

What Task Do You Want To Loop?

I hope that article helps get you started with loops.  Don't forget to download the free Excel file that contains the code samples.

Loops are definitely an intermediate coding technique that force us to go beyond the macro recorder.  Unfortunately, the macro recorded cannot create loops.  However, this is a skill that you will be able to use over and over again throughout your career to automate simple and complex tasks.  Understanding how to use loops will give you magical powers with Excel.

Please leave a comment below with a task that you want to automate with a loop.  Thank you! 🙂

How to Unhide and Rehide Multiple Sheets in Excel

Difference Between Select and Activate Methods in VBA