Bottom line: Learn how to create cascading or dependent drop-down lists (also known as cascading validation) in Excel.  This technique does NOT require named ranges.  If you don't mind using named ranges then there are a few links at the bottom of the page with solutions that will be easier to implement. 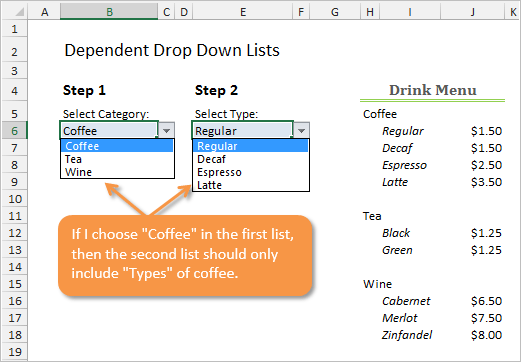 Leah asked the following question, “How do I create a drop-down list where the list of choices changes when I select an item in another list?”

You can see an example of this in the screencast below.  When I select “Coffee” from the validation list in cell B4, the list in cell E4 displays different types of Coffee.

These are called dependent or cascading drop-down lists because the 2nd list depends on the choice made in the first list.  This technique requires the use of the OFFSET function to create the dependencies, and it’s a great function to learn.

The rest of this article will explain how to create these dependent lists in your own workbook.  You can also download the example file to follow along, or just copy the sheets into your workbook.

Our first step is to create the source tables that we will use for the contents of the drop-down lists.

It’s also important to note that the child list needs to be sorted for this technique to work.  In the image below you can see that I sorted column D so that all the Category items are grouped together in the list.

How to Create the Lists

These lists originated from a much larger data table that contains transactional sales data.  To create the lists I needed to extract all the unique values for each list.

Fortunately, Excel has some great built-in tools that allow you to remove the duplicates.

One way is to use the Remove Duplicates tool that is located on the Data tab in the ribbon.

You could also create a pivot table to quickly list the unique values in the Rows area of the pivot.  Then copy/paste the results to the ‘Lists’ sheet that contains the source tables.

I won’t go into details on these techniques, but they will make it very fast to create and update you dependent lists.  If your lists change frequently with new items, then I would recommend the pivot table method because you can simply refresh the pivot table to generate your new list.

Ok, now that we have the source data lists setup we can create the drop-down lists.  We will do this with in-cell data validation lists.

Dependent drop-down lists are not a built-in feature of Excel.  Therefore, we need to get creative with some functions and formulas to create the dynamic dependencies between the lists.

With cell B6 selected on the ‘Dropdowns’ sheet, click the Data Validation button on the Data tab of the ribbon.

The Data Validation window will appear. 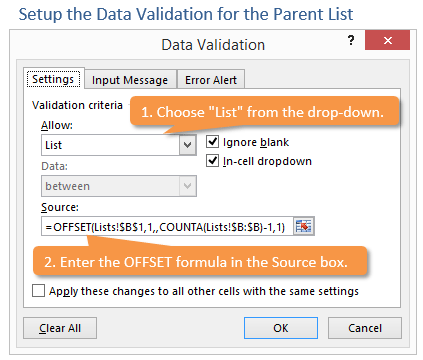 We could put the following reference in as the Source: =Lists!B2:B4

However, we want the source list to be dynamic.  Dynamic means that the list will automatically expand as we add more items to it.  We don’t want to have to change the source reference every time we add items to the list.

The OFFSET function helps create this dynamic range reference, and returns a reference to a range of cells based on the coordinates you specify.  It has the following arguments.

Here is a quick explanation of each argument in the formula:

You should now have a drop-down list in cell B6 that contains all the Category items in the list on the Lists tab.

If you are storing your lists in Excel Tables (which I highly recommend), then you could use the following formula instead.

Since Table references expand and collapse automatically when rows are added/deleted, you do not need to use the OFFSET function.

We now need to create the child list, which is dependent on the selection of the parent list.

The OFFSET function can be used for this list as well.  We just need to make a few adjustments to make it dependent on the selection in the parent list. 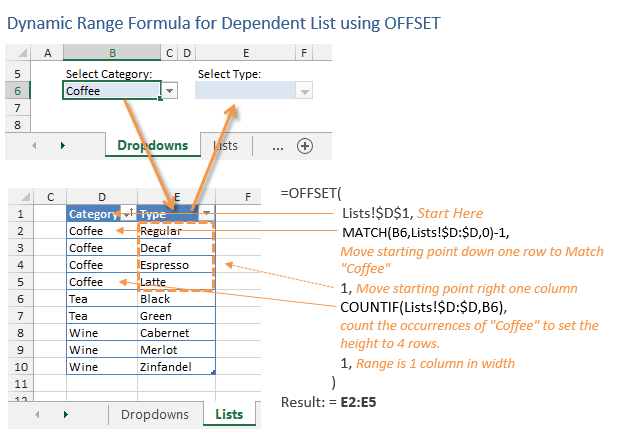 Here is an explanation of each argument in the OFFSET formula:

The child drop-down list in cell E6 should now be dependent on the selection made in cell B6 on the ‘Dropdowns’ sheet (parent list).

As an alternative, you could use the structured reference formulas with the Excel Table names instead of cell addresses.  The Table formula would look like the following.

It’s not as pretty because you have to add the INDIRECT function for each table reference.

There are a few different ways to create dependent drop down lists in Excel.  The main advantage of this method is that it does NOT required the use of named ranges.

Named ranges are a great feature, but can be very confusing for some users.  Therefore, I recommend not using named ranges unless you are confident that all future users of your model will understand them.

If you don’t mind using named ranges then the following articles provide some awesome tutorials on other ways to create the drop-downs.

You can download the sample workbook below to follow along, or simply copy the sheets into your own workbook.

Excel doesn't have a built-in option to search drop-down lists for a particular item, but I've created an add-in that gives you that option.  It's called List Search and you can access that add-in here: 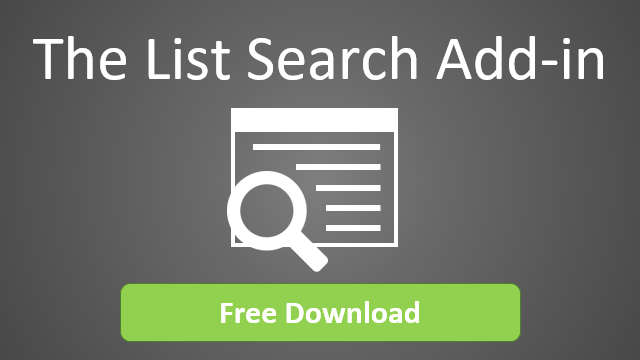 I hope this post is useful for you! Please leave a comment below with any questions or suggestions.

The LAMBDA Function Explained – How to Create Custom Functions in Excel

How to Fix Excel Formulas that are Not Calculating or Updating

3 Tips for the Pivot Table Fields List in Excel